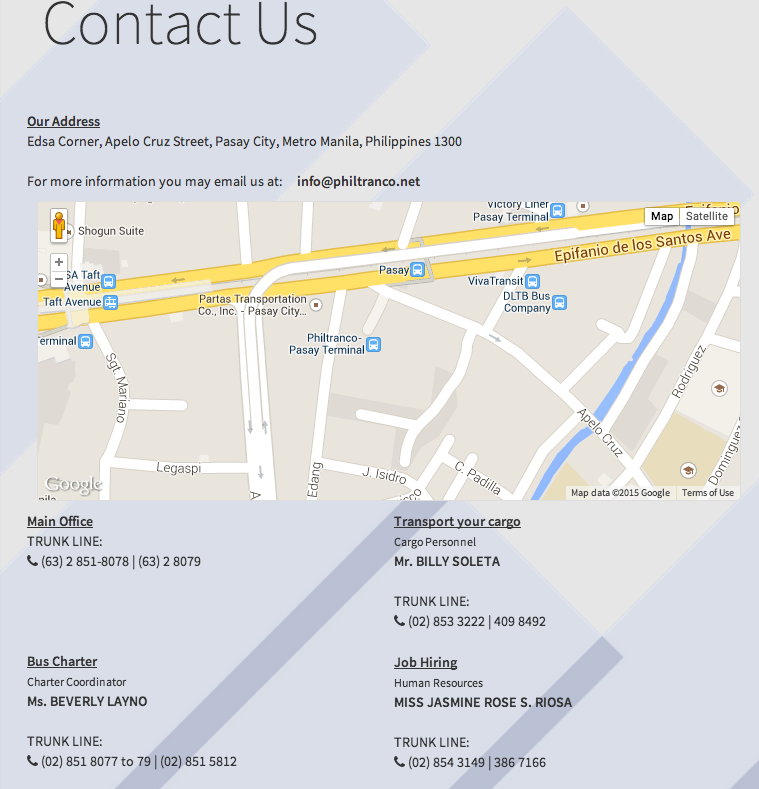 When you arrive in Manila, you will have to find the terminal of your bus company. There is no bus terminal at the airport and there is no central bus terminal. To make the search job even tougher, not all companies going south are to be found in the southern bus terminals of Metro Manila. The same is true for the north. There are 4 major sectors in Metro Manila where you can find bus terminals: Pasay, Sampaloc, Cubao and Trinoma in Quezon City. Trinoma stands for Triangle North Manila,

The best solution to get from the airport to the terminal of your bus company is taking a taxi. Even the rather nearby Pasay Terminals are not easy to find. Indicate the terminal and the bus company, your taxi driver will bring you there.

Jeepneys are the most known transportation to all Filipinos. They are the most affordable transport in the Philippines.  They stop if you wave at them. The jeepney is remnants of the Jeep used by the American troops during World War II, the innovative Filipinos modified the jeep (by lengthening the body and adding horizontal seats) to seat as many as 20 people (10 per side). Within Manila, you will find multiple Jeepneys per route, for added convenience. In the provinces, Jeepneys also connect towns and cities. For longer distances, however, buses are more comfortable.   Jeepneys have no timetable, but they ply usually fixed routes. The endpoints of this route are painted on the side. If you you are new to the region, it is rather difficult to know, whether your destination is on the route or not. Ask the driver whether he stops at your destination or not.  If you are a group, you may consider to hire a jeepney for a day. The driver then puts a sign on his windshield saying “Family use” and you won’t be stopped by other travelers.

Taxis are generally available within the major cities but are usually not used for travel across the various provinces and regions. Some FX (shared taxis), however, usually ply provincial routes. You can also call reputable Taxi companies that can arrange pickups and transfers as well as airport runs.

When hailing a taxi in the cities, ensure the meter is on and pay the metered fare. A tip of 10 pesos is acceptable. Also, make sure you have small denomination banknotes, as the drivers often claim not to have change in an effort to obtain a larger tip! Please do have coins ready with you. Moreover, don’t be surprised if drivers want to bypass the meter during rush hour.

There are 3 different official types of fares:

If you have never used a taxi in the Philippines, the “coupon taxis” might be best choice. Their fixed tariffs might be higher than the ones of the metered taxis, but only if their drivers are honest.

The tariffs for the yellow “airport” taxis are:

The tariffs for the white* “common” taxis are:

Car rental companies usually allow either self-drive or chauffeur-driven rentals: some types of cars however (like vans) may only be rented out with a chauffeur. Also, some rental companies (mostly local ones) may only allow rentals to be driven within the island where the city of rental is located: for example, it may be possible to drive with a rental from Manila to Legazpi (both on Luzon), but not from Manila (Luzon) to Tacloban (Leyte) because it would entail the use of roll-on/roll-off (RO/RO) ferries. If you intend to drive out of Luzon and into the outlying islands, the Visayas or Mindanao (and/or vice-versa), be sure that the rental company’s terms and conditions allow it.

International driving licenses are valid in the Philippines for up to 30 days after arrival, after which an International Driver’s Permit or a Philippine driving licenses are required. Vehicular traffic in the Philippines moves on the right, and the vast majority of road signs are in English. Most signs conform to design guidelines used in the United States but all units used are metric.