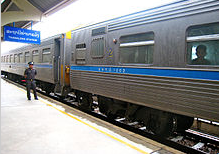 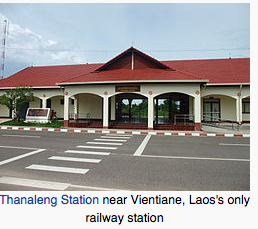 The long-awaited first link across the Mekong from the Thai town of Nong Khai to Tha Naleng near Vientiane finally opened in 2009. There are two shuttle services per direction per day, with one timed to connect to the night trains to/from Bangkok. Visa on arrival is available when crossing the border by train. The train is not a very attractive option because the railway station is in the middle of nowhere.

Thanaleng Railway Station, also known as Dongphosy Station (Ban Dong Phosy in Lao), is a railway station in Dongphosy village, Hadxayfong district, Vientiane Prefecture, Laos. It is located 20 km (12 mi) east of the Lao capital city of Vientiane and 4 km (2.5 mi) north of the border between Laos and Thailand along the Mekong River. The station opened on March 5, 2009, becoming part of the first international railway link serving Laos. Originally intended for use as a passenger station, Lao officials have stated their intention to convert it to a rail freight terminal to provide a low-cost alternative to road freight, the main mode of transport for goods entering Thailand. The station provides a connection between Vientiane and the capital cities of three other ASEAN nations (Thailand, Malaysia and Singapore), and several major Southeast Asian ports

Thanaleng Station is in a somewhat isolated area southeast of Vientiane, in Dongphosy village. Travellers arriving at the station must arrange their own travel onward into Vientiane, or use tuk-tuks or buses that may be stationed there to await travellers.  A transfer counter now operates at the station, where passengers requiring transfer into Vientiane pay a flat rate for transportation into the city, by tuk-tuk or minivan.

Lao tourist visas are available on arrival at Thanaleng. Entry and exit fees are collected at the station upon embarking or disembarking

As of September 2010, an estimated 2,500 to 3,000 passengers were using the Nong Khai–Thanaleng train daily. Trains consist of two coaches, each carrying up to 80 passengers.  Tickets onward to Bangkok may be purchased at the station; passengers travelling through must alight the train at Nong Khai to pass through Thai customs and immigration.