Doctors in Southeast Asia and Northern Australia know it as a stubborn, potentially deadly infection that causes pneumonia, abscesses and, in the most severe cases, organ failure. Without treatment it can kill within 48 hours. Military officials worry it could be converted into an agent of terror. from NPR News

I was reading my mornings news and ran across this. I live in Thailand for number of years and have never heard of Melioidosis. We cover health issues in SE Asia so decided to  research.  Commonly called Whitmore’s  Disease.  In northeast Thailand, there are around 2,000 culture-confirmed melioidosis cases per year, with a case fatality rate (CFR) of 40%!!!!!!!

This Germ Can Live Decades In Distilled Water, Kill Humans In 48 Hours

For doctors in areas where the disease has long been common, the numbers are a grim confirmation of old suspicions. “For us, we think it’s a reasonable number. In northeast Thailand, I see 2-3 patients die of this during the rainy season every day,” says Dr. Direk Limmathurotsakul, a microbiologist with the University of Oxford and Mahidol University in Bangkok and lead author on the study. “When I went to Indonesia, every lab we looked, we found this disease. We feel this is a minimum number.”

The disease has probably been killing people in these countries for years, but it’s often missed, says Dr. Bart Currie, a microbiologist at Menzies School of Health Research in Australia who did not work on the study. Because the symptoms are so nonspecific, abscesses and fever and sepsis can all occur in other bacterial infections, melioidosis earned the moniker “the Great Mimicker.” “This very potentially dangerous bacterium is even harder to diagnose than the standard bacterium,” Currie says.

Misdiagnosis is a common problem in areas where the disease is not well-known — and can be fatal, says Limmathurotsakul. “It’s worrying for areas outside of our research center [in northeastern Thailand]. And we know that’s happening in many emerging areas – like India, Brazil, Indonesia,” he says.

B. pseudomallei is naturally resistant to many commonly prescribed antibiotics. With good supporting care and access to proper medications, fatalities drop to around 1 in 10, and most healthy adults are able to survive an infection with good care. Otherwise, death sets in quickly. “There are many who have been treated with ineffective antibiotics for a period, says Limmathurotsakul. But by the time the disease is confirmed as melioidosis, he notes, “most of the time, the patient has already passed away.”

From the CDC  Center for Disease Control  USA

People can get Melioidosis through direct contact with contaminated soil and surface waters.

It is very rare for people to get the disease from another person. While a few cases have been documented, contaminated soil and surface water remain the primary way in which people become infected.

Besides humans, many animal species are susceptible to melioidosis, including:

There are several types of melioidosis infection, each with their own set of symptoms.

However, it is important to note that melioidosis has a wide range of signs and symptoms that can be mistaken for other diseases such as tuberculosis or more common forms of pneumonia.

The time between an exposure to the bacteria that causes the disease and the emergence of symptoms is not clearly defined, but may range from one day to many years; generally symptoms appear two to four weeks after exposure.

Although healthy people may get melioidosis, the major risk factors are: 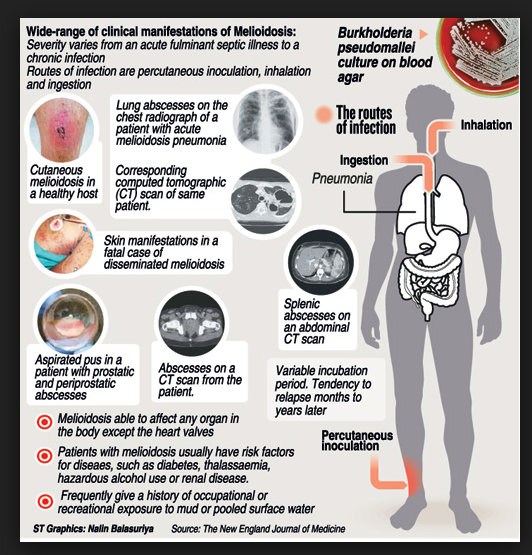 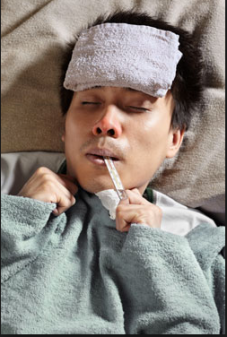 While melioidosis infection has taken place all over the world, Southeast Asia and northern Australia are the areas in which it is primarily found.

In the United States, confirmed cases reported in previous years have ranged from zero to five and have occurred among travelers and immigrants coming from places where the disease is widespread.

Moreover, it has been found among troops of all nationalities that have served in areas with widespread disease.

The greatest numbers of melioidosis cases are reported in:

Though rarely reported, cases are thought to frequently occur in:

When a melioidosis infection is diagnosed, the disease can be treated with the use of appropriate medication.

In areas where the disease is widespread (see map below), contact with contaminated soil or water can put people at risk for melioidosis.

However, in these areas, there are things that certain groups of people can do to help minimize the risk of exposure:

Culture of B. pseudomallei from blood, sputum, pus, urine, synovial fluid, peritoneal fluid, or pericardial fluid is diagnostic. Indirect hemagglutination assay is a widely used serologic test but is not considered confirmatory. Diagnostic assistance is available through CDC (http://www.cdc.gov/ncezid/dhcpp/bacterial_special/zoonoses_lab.html).

Is commonly found in soil in Southeast Asia and Northern Australia1,2. Melioidosis can be difficult to diagnose due to its diverse clinical manifestations and the inadequacy of conventional bacterial identification methods3. The bacterium is intrinsically resistant to a wide range of antimicrobials, and treatment with ineffective antimicrobials may result in case fatality rates (CFRs) exceeding 70%

We estimate there to be 165,000 (95% credible interval 68,000–412,000) human melioidosis cases per year worldwide, from which 89,000 (36,000–227,000) people die. Our estimates suggest that melioidosis is severely underreported in the 45 countries in which it is known to be endemic and that melioidosis is probably endemic in a further 34 countries that have never reported the disease. The large numbers of estimated cases and fatalities emphasize that the disease warrants renewed attention from public health officials and policy makers.

In northeast Thailand, there are around 2,000 culture-confirmed melioidosis cases per year, with a case fatality rate (CFR) of 40%12. In Singapore, 550 melioidosis cases have occurred during the last ten years, of which a fifth resulted in death13. Skin inoculation is considered the main route of infection in agricultural workers in developing countries14. Recent evidence also suggests that inhalation of Burkholderia pseudomalleiduring extreme weather events15,16 and ingestion of B. pseudomalleicontaminated water are also important routes of infection17. High-risk groups include patients with diabetes mellitus, chronic kidney disease and excessive alcohol intake12,18. Developed countries are also observing an emergence of melioidosis related to travelling and importation of cases11. No licensed vaccine for melioidosis is currently available.

We found that high rainfall and temperature, and anthrosol and acrisol soil types, are strongly associated with the presence of B. pseudomallei.

South Asia is predicted to bear 44% of the overall burden, because large populations live in areas contaminated with B. pseudomallei. Only Australia, Brunei Darussalam and Singapore have national surveillance data for melioidosis