James Bond Island is on the top things to see when in Phuket Island Area Thailand.  Not very big but lot to see on the way there.

Khao Phing Kan (Thai: เขาพิงกัน) or Ko Khao Phing Kan (เกาะเขาพิงกัน) is an island in Thailand, in Phang Nga Bay northeast of Phuket. About 40 metres (130 ft) from the shores of Khao Phing Kan lies a 20-metre (66 ft) tall islet called Ko Tapu (เกาะตะปู, pronounced [kɔ̀ʔ tapuː]) or Khao Tapu (เขาตะปู  [kʰǎw tapuː]). The islands are limestone tower karsts[1] and are a part of Ao Phang Nga National Park. Since 1974, when it was featured in the James Bond movies The Man with the Golden Gun and Tomorrow Never Dies, Khao Phing Kan has been popularly called James Bond Island.

Before 1974, the island was a rarely visited indigenous area. However, it was chosen as one of the locations for the 1974 James Bond movie The Man with the Golden Gun as the hideout for Bond’s antagonist, Francisco Scaramanga. After the movie release it turned into a popular tourist destination[11] that has gradually contaminated Khao Phing Kan with household litter.[10]

In 1981, the island became the most famous part of the newly established Ao Phang Nga Marine National Park.[4] Since 1998, it is forbidden for tourist boats to approach Ko Tapu. This measure aims to stop erosion of the limestone rocks on and near the islet that might eventually result in its collapse.[12]

Khao Phing Kan consists of two forest-covered islands with steep shores. They lie in the northwestern part of Phang Nga Bay, some 6 kilometres (3.7 mi) from the mainland, amid a group of a dozen of other islands. Its western part is about 130 metres (430 ft) in diameter whereas the eastern part is about 240 metres (790 ft) long and 140 metres (460 ft) wide and is elongated northwards. The island has a few caves and two sandy beaches, in the southwest and between the twin islands. The former hosts the government office where every visitor has to pay a tax. The latter is used as the port for the tourist boats arriving from the mainland and has several souvenir shops selling items like coral and shells and plastic-encased butterflies, scorpions, and spiders.[4] Beaches and caves are regularly flooded with the tides, which have an amplitude of 2–3 metres (6.6–9.8 ft), so access to some caves is only possible during low tide.[3] The Thai name for Khao Phing Kan reflects the particular shape of the island which appears as if a flat limestone cliff tumbled sideways and leaned on a similar rock in the centre of the island.[4]

Waters around the island are only few metres deep and are pale-green in colour. The bottom is covered with silt which is brought to the Phang Nga Bay by several rivers from the north.[13] 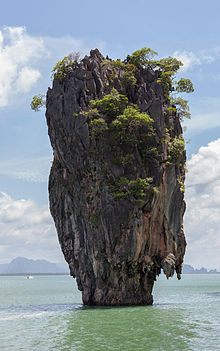 Ko Tapu is a limestone rock about 20 metres (66 ft) tall with the diameter increasing from about 4 metres (13 ft) near the water level to about 8 metres (26 ft) at the top. It lies about 40 metres (130 ft) to the west from the northern part of Khao Phing Kan.

A local legend explains the formation of Ko Tapu as follows. Once upon a time, there lived a fisherman who used to bring home many fish every time he went to the sea. However, one day he could not catch any fish despite many attempts and only picked up a nail with his net. He kept throwing the nail back into the sea and catching it again. Furious, he took his sword and cut the nail in half with all his strength. Upon impact, one half of the nail jumped up and speared into the sea, forming Ko Tapu.[14]

A scientific version of the Ko Tapu formation says that in the Permian period, the area was a barrier reef. Then, upon tectonic movements, it ruptured, and its parts were dispersed over the area and flooded by the rising ocean. Wind, waves, water currents, and tides gradually eroded the islands thus formed, sometimes producing peculiar shapes, such as Ko Tapu.[13] Tide-related erosion is visible at the bottom of the rock.

I made the trip in 2007 and was worth it, only regret I did not kayak around the area

When I made the trip a Thai friend took us and arranged it.  We left from a dock and went thru some beautiful scenery but I suggest you use a regular tourist guide agency.

We recommend Phuket Southern Tours located in Patong for booking.  They are experience and good people to do business with ( not a paid add for them!)

← How comes I have never visited that place before?
Koh Samui Airport →