Pearl Harbor December 7th 1941 To be Remembered by jackie

This was the start of WWII for America.   The lost of life was large but not compared to what was coming!  The Reason Japan bombed Pearl Harbor was to destroy the Battleships which at time was the principal ship for war.  Japan wanted the US Navy out of the way so Japan could invade SE ASIA and not able to stop Japans war with China. So in a way the start of war also for SE Asia as Japan attacked the Philippines just hours later but because of the time difference was on the 8th.

Japan intended the attack as a preventive action to keep the U.S. Pacific Fleet from interfering with military actions the Empire of Japan planned in Southeast Asia against overseas territories of the United Kingdom, the Netherlands, and the United States. There were near-simultaneous Japanese attacks on the U.S.-held Philippines, Guam and Wake Island and on the British Empire in Malaya, Singapore, and Hong Kong.[13]The attacks – from troop landings at Kota Bharu, Malaya, to the air attacks ranging geographically from Hong Kong to Pearl Harbor – took place over seven hours

The attack on Pearl Harbor was intended to neutralize the U.S. Pacific Fleet, and hence protect Japan’s advance into Malaya and the Dutch East Indies, where it sought access to natural resources such as oil and rubber.

Ninety minutes after it began, the attack was over. 2,008 sailors were killed and 710 others wounded; 218 soldiers and airmen (who were part of the Army until the independent U.S. Air Force was formed in 1947) were killed and 364 wounded; 109 marines were killed and 69 wounded; and 68 civilians were killed and 35 wounded. In total, 2,403 Americans died and 1,178 were wounded.[90] Eighteen ships were sunk or run aground, including five battleships. Of the American fatalities, nearly half were due to the explosion of Arizona‘s forward magazine after it was hit by a modified 40 cm (16 in.) shell.

The attack had several major aims. First, it intended to destroy important American fleet units, thereby preventing the Pacific Fleet from interfering with Japanese conquest of the Dutch East Indies and Malaya. Second, it was hoped to buy time for Japan to consolidate its position and increase its naval strength before shipbuilding authorized by the 1940 Vinson-Walsh Act erased any chance of victory.[53][54] Finally, it was meant to deliver a severe blow to American morale, one which would discourage Americans from committing to a war extending into the western Pacific Ocean and Dutch East Indies. To maximize the effect on morale, battleships were chosen as the main targets, since they were the prestige ships of any navy at the time. The overall intention was to enable Japan to conquer Southeast Asia without interference.[53]

Striking the Pacific Fleet at anchor in Pearl Harbor carried two distinct disadvantages: the targeted ships would be in very shallow water, so it would be relatively easy to salvage and possibly repair them; and most of the crews would survive the attack, since many would be on shore leave or would be rescued from the harbor. A further important disadvantage—this of timing, and known to the Japanese—was the absence from Pearl Harbor of all three of the U.S. Pacific Fleet’s aircraft carriers (Enterprise, Lexington, and Saratoga). IJN top command was so imbued with Admiral Mahan‘s “decisive battle” doctrine—especially that of destroying the maximum number of battleships—that, despite these concerns, Yamamoto decided to press ahead.[55][page needed]

Japanese confidence in their ability to achieve a short, victorious war also meant other targets in the harbor, especially the navy yard, oil tank farms, and submarine base, were ignored, since—by their thinking—the war would be over before the influence of these facilities would be felt. 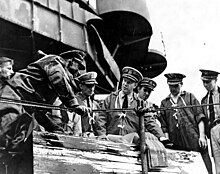 After a systematic search for survivors, formal salvage operations began. Captain Homer N. Wallin, Material Officer for Commander, Battle Force, U.S. Pacific Fleet, was immediately ordered to lead salvage operations. “Within a short time I was relieved of all other duties and ordered to full time work as Fleet Salvage Officer”.[112][nb 21]

Around Pearl Harbor, divers from the Navy (shore and tenders), the Naval Shipyard, and civilian contractors (Pacific Bridge and others) began work on the ships that could be refloated. They patched holes, cleared debris, and pumped water out of ships. Navy divers worked inside the damaged ships.

Within six months, five battleships and two cruisers were patched or re-floated so they could be sent to shipyards in Pearl Harbor and on the mainland for extensive repair.

Intensive salvage operations continued for another year, a total of some 20,000 man-hours under water.[114] Oklahoma, while successfully raised, was never repaired, and capsized while under tow to the mainland in 1947. Arizona and the target ship Utah were too heavily damaged for salvage, though much of their armament and equipment was removed and put to use aboard other vessels. Today, the two hulks remain where they were sunk,[115] with Arizona becoming a war memorial.

The american worker are the ones that made this country great.  They crossed the plaines,  started farms, built cars etc.  and after Pearl Harbor got the US Navy back in business.  Today that is sometimes forgotten and too much credit to wall street!

Theatre of World War II was the name given to the campaigns of the Pacific War in Burma, Ceylon, India, Thailand, Indochina, Malaya and Singapore. Purposes of the conquest of these countries included the securing of natural resources such as rubber and petroleum from the European colonies in the region. Conflict in the theatre began when the Empire of Japan invaded French Indochina in September 1940, the war went to a new level with the Raid on Pearl Harbor, and simultaneous attacks on Hong Kong, the Philippines, Thailand, Singapore and Malaya on 7/8 December 1941. The main landing at Singora (now Songkhla) on the east side of the Isthmus of Kra preceded the bombing of Pearl Harbor by several hours. Action in the theatre officially ended on 9 September 1945.

R. J. Rummel, a professor of political science at the University of Hawaii, estimates that between 1937 and 1945, the Japanese military murdered from nearly 3 to over 10 million people, most likely 6 million Chinese, Taiwanese, Singaporeans, Malaysians, Indonesians, Koreans, Filipinos and Indochinese, among others, including Western prisoners of war. According to Rummel, “This democide [i.e., death by government] was due to a morally bankrupt political and military strategy, military expediency and custom, and national culture.”[59] According to Rummel, in China alone, during 1937–45, approximately 3.9 million Chinese were killed, mostly civilians, as a direct result of the Japanese operations and 10.2 million in the course of the war.[60] The most infamous incident during this period was the Nanking Massacre of 1937–38, when, according to the findings of the International Military Tribunal for the Far East, the Japanese Army massacred as many as 300,000 civilians and prisoners of war, although the accepted figure is somewhere in the hundreds of thousands.

In Southeast Asia, the Manila massacre of February 1945 resulted in the death of 100,000 civilians in the Philippines. It is estimated that at least one out of every 20 Filipinos died at the hands of the Japanese during the occupation.[63][64] In Singapore during February and March 1942, the Sook Ching massacre was a systematic extermination of perceived hostile elements among the Chinese population there. Lee Kuan Yew, the ex-Prime Minister of Singapore, said during an interview with National Geographic that there were between 50,000 and 90,000 casualties,[65] while according to Major General Kawamura Saburo, there were 5,000 casualties in total.[66]

There were other massacres of civilians, e.g. the Kalagong massacre. In wartime Southeast Asia, the Overseas Chinese and European diaspora were special targets of Japanese abuse; in the former case, motivated by an inferiority complex vis-à-vis the historic expanse and influence of Chinese culture that did not exist with the Southeast Asian indigenes, and the latter, motivated by a racist Pan-Asianism and a desire to show former colonial subjects the impotence of their Western masters.[67] The Japanese executed all the Malay Sultans on Kalimantan and wiped out the Malay elite in the Pontianak incidents. In the Jesselton Revolt, the Japanese slaughtered thousands of native civilians during the Japanese occupation of British Borneo and nearly wiped out the entire Suluk Muslim population of the coastal islands. During the Japanese occupation of the Philippines, when a Moro Muslim juramentado swordsman launched a suicide attack against the Japanese, the Japanese would massacre the man’s entire family or village.

Posted on December 7, 2015 by Life in SE ASIA a Daily Magazine

← Up Up and Away photo of day by jackie
Peter In Kamathipura: Mumbai’s Nortorious Red-Light District →