we are not doctors but bring to you reliable information from sources and give you the link of the source.  Please refer to a medical professional if ill or have questions.

From Wikipedia, the free encyclopedia
Box jellyfish (class Cubozoa) are cnidarian invertebrates distinguished by their cube-shaped medusae. Some species of box jellyfish produce extremely potent venom: Chironex fleckeri, Carukia barnesi and Malo kingi. Stings from these and a few other species in the class are extremely painful and can be fatal to humans.

The box jellyfish’s nervous system is more developed than that of many other jellyfish. Notably, they possess a nerve ring around the base of the bell that coordinates their pulsing movements, a feature found elsewhere only in the crown jellyfish. Whereas some other jellyfish have simple pigment-cup ocelli, box jellyfish are unique in the possession of true eyes, complete with retinas, corneas and lenses. Their eyes are set in clusters called rhopalia, located in pockets halfway up the outer, flat surfaces of the bell. Each contains two rhopalial ocelli with lenses, one directed upwards and the other downwards and inwards towards the manubrium.[2] This enables the animal to see specific points of light, as opposed to simply distinguishing between light and dark. Box jellyfish also have twenty ocelli (simple eyes) that do not form images, but detect light and dark; they therefore have a total of twenty-four eyes.[4] Near the rhopalia are statoliths which detect gravitational pull and help the animal to orientate itself.[5]

Box jellyfish also display complex, probably visually guided behaviors such as obstacle avoidance and fast directional swimming.[6] Research indicates that, owing to the number of rhopalial nerve cells and their overall arrangement, visual processing and integration at least partly happen within the rhopalia of box jellyfish.[6] The complex nervous system supports a relatively advanced sensory system compared to other jellyfish, and box jellyfish have been described as having an active, fish-like behavior.[7]

The box jellyfish actively hunts its prey (small fish), rather than drifting as do true jellyfish. They are capable of achieving speeds of up to 1.5 to 2 metres per second or about 4 knots (7.4 km/h; 4.6 mph)

A fully grown box jellyfish can measure up to 20 cm (7.9 in) along each box side (or 30 cm (12 in) in diameter), and the tentacles can grow up to 3 m (9.8 ft) in length. Its weight can reach 2 kg (4.4 lb). There are about 15 tentacles on each corner. Each tentacle has about 500,000 cnidocytes, containing nematocysts, a harpoon-shaped microscopic mechanism that injects venom into the victim

Although the box jellyfish has been called “the world’s most venomous creature”, only a few species in the class have been confirmed to be involved in human deaths, and some species pose no serious threat at all. For example, the sting of Chiropsella bart only results in short-lived itching and mild pain.

n Australia, C. fleckeri has caused at least 64 deaths since the first report in 1883, but even in this species most encounters appear to only result in mild envenoming.[19] Most recent deaths in Australia have been in children, which is linked to their smaller body mass.[18] In parts of the Malay Archipelago, the number of lethal cases is far higher (in the Philippines alone, an estimated 20-40 die annually from Chirodropid stings), likely due to limited access to medical facilities and antivenom, and the fact that many Australian beaches are enclosed in nets and have vinegar placed in prominent positions allowing for rapid first aid] Vinegar is also used as treatment by locals in the Philippines. 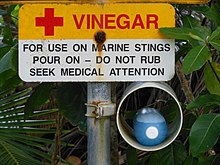 The recently discovered and very similar Chironex yamaguchii may be equally dangerous, as it has been implicated in several deaths in Japan.[10] It is unclear which of these species is the one usually involved in fatalities in the Malay Archipelago.[10][21] In 1990, a 4-year-old child died after being stung by Chiropsalmus quadrumanus at Galveston Island in the Gulf of Mexico, and either this species or Chiropsoides buitendijki are considered the likely perpetrators of two deaths in West Malaysia.[21] At least two deaths in Australia have been attributed to the thumbnail-sized Irukandji jellyfish.[22][23] Those who fall victim to these may suffer severe physical and psychological symptoms, known as Irukandji syndrome.[24] Nevertheless, most victims do survive, and out of 62 people treated for Irukandji envenomation in Australia in 1996, almost half could be discharged home with few or no symptoms after 6 hours, and only two remained hospitalized approximately a day after they were stung.[24] Warning signs and first aid stations have been erected in Thailand following the death of a 5-year-old French boy in August 2014

Once a tentacle of the box jellyfish adheres to skin, it pumps nematocysts with venom into the skin, causing the sting and agonizing pain. Flushing with vinegar is used to deactivate undischarged nematocysts to prevent the release of additional venom. A 2014 study reported that vinegar also increased the amount of venom released from already-discharged nematocysts; however, this study has been criticized on methodological grounds.[30]

Removal of additional tentacles is usually done with a towel or gloved hand, to prevent secondary stinging. Tentacles can still sting if separated from the bell, or after the creature is dead. Removal of tentacles may cause unfired nematocysts to come into contact with the skin and fire, resulting in a greater degree of envenomation.

Although commonly recommended in folklore and even some papers on sting treatment,[31] there is no scientific evidence that urine, ammonia, meat tenderizer, sodium bicarbonate, boric acid, lemon juice, fresh water, steroid cream, alcohol, cold packs, papaya, orhydrogen peroxide will disable further stinging, and these substances may even hasten the release of venom.[32] Heat packs have been proven for moderate pain relief.[33] Pressure immobilization bandages, methylated spirits, or vodka should never be used for jelly stings.[34][35][36][37] In severe Chironex fleckeri stings cardiac arrest can occur quickly.

In 2011, University of Hawaii Assistant Research Professor Angel Yanagihara announced that she had developed an effective treatment by “deconstructing” the venom contained in the box jellyfish tentacles. Its effectiveness was demonstrated in the PBS NOVA documentary Venom: Nature’s Killer, originally shown on North American television in February 2012

What to expect for a box jellyfish sting:

The victim will be in an enormous amount of pain, and quite possibly hysterical and uncontrollable. The tentacles will likely still be on the victim, appearing as tapeworm-like ribbons. The sting marks will look like whip-marks, swollen, red; within a few minutes the marks will go frosty white as the skin dies.

Try to keep the victim calm, and get help urgently (call ‘000’ for an ambulance, or send someone to get a Lifesaver). Anyone giving care to a box jellyfish victim should anticipate that the victim may lose conciousness and require urgent CPR (Cardio-Pulmonary Resuscitation) – without CPR, they are unlikely to survive. Stings covering more than 1/2 of one limb (or equivalent) are considered life threatening. Do not use compression bandages.

Contact stings to the caregiver will be painful but will not be life-threatening, due to the small amount of exposure. Flood the sting area with vinegar as soon as possible to neutralise remaining stinging cells, to stop more venom from being injected into the victim. If you are presented with a choice of going to get vinegar or commencing CPR, commence CPR — it is better to have a living patient with more venom than to have a dead patient that has been vinegared (if they have lost conciousness, they already have enough venom in their body to kill them).

It is clear through anecdotal evidence that an unknown number of potential box jellyfish stings are going unreported – meaning that no medical treatment is being sought and no official follow up is being made.
Firstly, if you think you have been stung by a dangerous jellyfish it is vitally important that you quickly seek medical attention – medical clinic, resort doctor, hospital. While often a time consuming process and one no holidaymaker wants to endure, a jellyfish sting of any seriousness must be looked at by a health professional to reduce immediate pain and the threat of further damage.
If a box jellyfish stings you then you would know quickly how bad it was, but if not life threatening it must still be looked at due to the stinging cells entering the body and resultant secondary infections that can cause illness and permanent scarring.
If Irukandji, the potentially life threatening but at the least excrutiating symptoms can be delayed by 20-30 minutes, medical assistance is essential!
Other jellyfish stings can cause horrible wounds and nasty scarring that can be reduced if immediate medical treatment is applied.
Also, by attending a medical facility, a record is created that can be followed up by authorities looking to improve the situation for all swimmers and water users. This data will prove crucial in determining whether the authorities continue to pursue and address the problem of potentially lethal jellyfish in Thai and Malaysian waters. Ultimately, your effort to help yourself could one day save the life of another.

Click this link to report a jellyfish sting with The Marine Medic:

Keep Your Kids Safe In A Suit

Families with children taking a vacation to Thailand or other South-East Asian countries will most probably spend a good part of their holiday on a beautiful tropical beach. Please make sure that everyone takes proper precautions against jellyfish as there are many stinging species in the sea.

Box jellyfish are there also and the best way you can protect yourself and loved ones is by wearing a lycra suit that at least covers the torso, arms to the wrist and legs to the ankle.

Remember that potentially lethal box jellyfish catch their food in sandy bottom, shallow water – exactly where kids love to play and exactly where parents think their children will be the safest.

This blogger has no association with lycra suit manufacturers or distributers and retailers and no interest in profiting from their sale. My only aim is to keep you and your family safe. If you are not prepared to wear a suit yourself at the very least please make sure your children have a suit and wear it when in the water at all times. The suit can be easily taken off when out of the water. It is very light and folds up easily taking little space in your luggage. It also provides 100% UV sun protection and dries very quickly.

Search online for lycra suits or stinger suits and invest in the safety of your family – as you would when securing them with a seat belt in the car or a helmet on a bike – and minimise the risk of turning your dream family holiday into a nightmare.

Also remember to have a cheap bottle of vinegar handy to immediately splash on a sting just in case it occurs – do not touch the tentacles or try and scrape them off until after vinegar is liberally splashed on for about 30 seconds.

Other posts on suits and protection:

Jellyfish Lotion Is Not Fully Effective

We always recommend having Travel Medical and evacuation insurance

Posted on August 2, 2015 by Life in SE ASIA a Daily Magazine