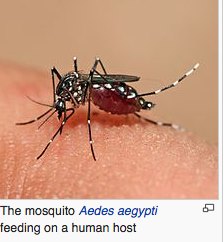 In our on going series of health issues in SE Asia,  we are not doctors or medical people so will use Health sites and rely on USA and World health Org, as sources and will give LINKS. Our goal is to provide reliable sources and LINKS for you to use.

Link to WHO  for Dengue Fever

Dengue is a mosquito-borne viral disease that has rapidly spread in all regions of WHO in recent years. Dengue virus is transmitted by female mosquitoes mainly of the species Aedes aegypti and, to a lesser extent, A. albopictus. The disease is widespread throughout the tropics, with local variations in risk influenced by rainfall, temperature and unplanned rapid urbanization.

Severe dengue (also known as Dengue Haemorrhagic Fever) was first recognized in the 1950s during dengue epidemics in the Philippines and Thailand. Today, severe dengue affects most Asian and Latin American countries and has become a leading cause of hospitalization and death among children in these regions.

There are 4 distinct, but closely related, serotypes of the virus that cause dengue (DEN-1, DEN-2, DEN-3 and DEN-4). Recovery from infection by one provides lifelong immunity against that particular serotype. However, cross-immunity to the other serotypes after recovery is only partial and temporary. Subsequent infections by other serotypes increase the risk of developing severe dengue.

An estimated 500 000 people with severe dengue require hospitalization each year, a large proportion of whom are children. About 2.5% of those affected die.

The Aedes aegypti mosquito lives in urban habitats and breeds mostly in man-made containers. Unlike other mosquitoes Ae. aegypti is a day-time feeder; its peak biting periods are early in the morning and in the evening before dusk. Female Ae. aegyptibites multiple people during each feeding period.

Dengue should be suspected when a high fever (40°C/104°F) is accompanied by 2 of the following symptoms: severe headache, pain behind the eyes, muscle and joint pains, nausea, vomiting, swollen glands or rash. Symptoms usually last for 2–7 days, after an incubation period of 4–10 days after the bite from an infected mosquito.

Severe dengue is a potentially deadly complication due to plasma leaking, fluid accumulation, respiratory distress, severe bleeding, or organ impairment. Warning signs occur 3–7 days after the first symptoms in conjunction with a decrease in temperature (below 38°C/100°F) and include: severe abdominal pain, persistent vomiting, rapid breathing, bleeding gums, fatigue, restlessness and blood in vomit. The next 24–48 hours of the critical stage can be lethal; proper medical care is needed to avoid complications and risk of death.

There is no specific treatment for dengue fever.

For severe dengue, medical care by physicians and nurses experienced with the effects and progression of the disease can save lives – decreasing mortality rates from more than 20% to less than 1%. Maintenance of the patient’s body fluid volume is critical to severe dengue care.

There is no vaccine to protect against dengue. However, major progress has been made in developing a vaccine against dengue/severe dengue. Three tetravalent live-attenuated vaccines are under development in phase II and phase III clinical trials, and 3 other vaccine candidates (based on subunit, DNA and purified inactivated virus platforms) are at earlier stages of clinical development. WHO provides technical advice and guidance to countries and private partners to support vaccine research and evaluation.

Symptoms, which usually begin four to six days after infection and last for up to 10 days, may include

Sometimes symptoms are mild and can be mistaken for those of the fluor another viral infection. Younger children and people who have never had the infection before tend to have milder cases than older children and adults. However, serious problems can develop. These include dengue hemorrhagic fever, a rare complication characterized by high fever, damage to lymph and blood vessels, bleeding from the nose and gums, enlargement of the liver, and failure of the circulatory system. The symptoms may progress to massive bleeding, shock, and death. This is called dengue shock syndrome (DSS).

People with weakened immune systems as well as those with a second or subsequent dengue infection are believed to be at greater risk for developing dengue hemorrhagic fever.

Doctors can diagnose dengue infection with a blood test to check for the virus or antibodies to it. If you become sick after traveling to a tropical area, let your doctor know. This will allow your doctor to evaluate the possibility that your symptoms were caused by a dengue infection. 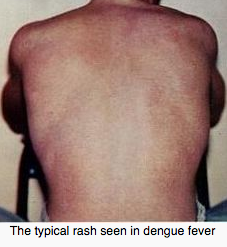 There is no specific medicine to treat dengue infection. If you think you may have dengue fever, you should use pain relievers with acetaminophen and avoid medicines with aspirin, which could worsen bleeding. You should also rest, drink plenty of fluids, and see your doctor. If you start to feel worse in the first 24 hours after your fever goes down, you should get to a hospital immediately to be checked for complications. 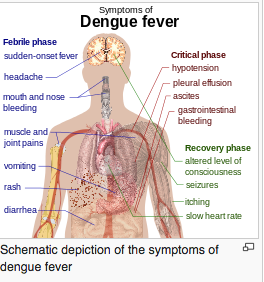 There is no vaccine to prevent dengue fever. The best way to prevent the disease is to prevent bites by infected mosquitoes, particularly if you are living in or traveling to a tropical area. This involves protecting yourself and making efforts to keep the mosquito population down.

To reduce the mosquito population, get rid of places where mosquitoes can breed. These include old tires, cans, or flower pots that collect rain. Regularly change the water in outdoor bird baths and pets’ water dishes.

If someone in your home gets dengue fever, be especially vigilant about efforts to protect yourself and other family members from mosquitoes. Mosquitoes that bite the infected family member could spread the infection to others in your home.

a source for some photos is Wikipedia

additional information from The Diplomat

In Malaysia, the signs are ominous. The coming wet season is already shaping up as potentially the worst on record for dengue fever with regional governments stepping up efforts to limit the spread of the potentially deadly disease.

Twenty-two people have already died in Malaysia this year from dengue, almost triple the number when compared with the same period a year ago, putting the country on track to beat the record of 134 deaths in 2010.

A debilitating and painful disease, dengue fever occurs the world over. More than 100 million cases of the mosquito-borne disease are reported each year with dengue hemorrhagic fever and dengue shock syndrome proving to be the deadliest.

Authorities say three billion people live in regions of the world susceptible to dengue and that includes the 600 million people who live in Southeast Asia. According to the Indonesian Health Ministry, Indonesia ranked first in the number of dengue cases across ASEAN with more than 90,000 cases in 2013.

Vietnam and Cambodia, with substantially smaller populations, held second and third places with 86,000 and 42,000 cases, respectively.

It is transmitted by the Aedes aegypti mosquito and the World Health Organization has labeled the disease as one of the fastest-growing viral threats globally. There is no vaccine, hence prevention focuses on mosquito control.

The increasing threat arose as the HDI Group of Companies Indonesia said it would conduct a second set of clinical trials this year of its propolis honey-based treatment for dengue hemorrhagic fever.

It said this followed successful trials on 50 dengue fever patients at a hospital in East Jakarta.

“We want to help the government and the people because Indonesia always has to face the outbreak of this disease every single year. We are hoping that what we do today can save lives in the future and help speed up the recovery of patients,” HDI product development director Alva Paloma told local media.

Propolis is a resinous substance produced by bees. Patients who received 300 milligrams of propolis honey extract a day have showed signs of improvement within two to four days.

Other initiatives include the Eliminate Dengue Project-Yogya which involves the release of Aedes aegypti mosquitoes carrying the Wolbachia bacterium, which prevents transmission of the virus. The Gadjah Mada University’s (UGM) School of Medicine hopes will all scientists to naturally control the outbreak of dengue fever.

There are no specific antiviral drugs for dengue, however maintaining proper fluid balance is important.[9] Treatment depends on the symptoms.[39] Those who are able to drink, are passing urine, have no “warning signs” and are otherwise healthy can be managed at home with daily follow up and oral rehydration therapy.[39] Those who have other health problems, have “warning signs” or who cannot manage regular follow up should be cared for in hospital.[7][39] In those with severe dengue care should be provided in an area where there is access to an intensive care unit.[39]

Intravenous hydration, if required, is typically only needed for one or two days.[39] The rate of fluid administration is titrated to a urinary output of 0.5–1 mL/kg/h, stable vital signs and normalization of hematocrit.[7] The smallest amount of fluid required to achieve this is recommended.[39] Invasive medical procedures such as nasogastric intubation, intramuscular injections and arterial punctures are avoided, in view of the bleeding risk.[7] Paracetamol (acetaminophen) is used for fever and discomfort while NSAIDs such as ibuprofen andaspirin are avoided as they might aggravate the risk of bleeding.[39] Blood transfusion is initiated early in people presenting with unstable vital signs in the face of a decreasing hematocrit, rather than waiting for the hemoglobin concentration to decrease to some predetermined “transfusion trigger” level.[40] Packed red blood cells or whole blood are recommended, while platelets and fresh frozen plasma are usually not.[40] There is not enough evidence to determine if corticosteroids have a positive or negative effect in dengue fever.[41]

During the recovery phase intravenous fluids are discontinued to prevent a state of fluid overload.[7] If fluid overload occurs and vital signs are stable, stopping further fluid may be all that is needed.[40] If a person is outside of the critical phase, a loop diuretic such asfurosemide may be used to eliminate excess fluid from the circulation.[40]

Below was broadcast 2008 but still good information