Myanmar is one of three countries in the world who do not use the metric system (the other two being Liberia and the United States). The unique Myanmar “viss” is a unit of measurement based on the weight of a single copper coin called a tical.  The  weight of 100 ticals equals one viss. The government has recently agreed to adopt the metric system to facilitate international trade, but as of our visit in 2014, the viss system is used everywhere to weigh market goods as well as luggage at the airport.
The large scales at the airport check-in counter are graduated both in viss and in kilos.

In the local food markets, vegetables are sold using a balance scale against standardized weights in viss – or other objects which are considered of standard weight, such as “D” cell batteries. 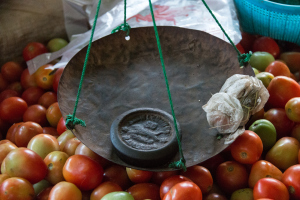 Small items such as gems, pearls, gold, silver or opium…

Posted on February 4, 2015 by Life in SE ASIA a Daily Magazine