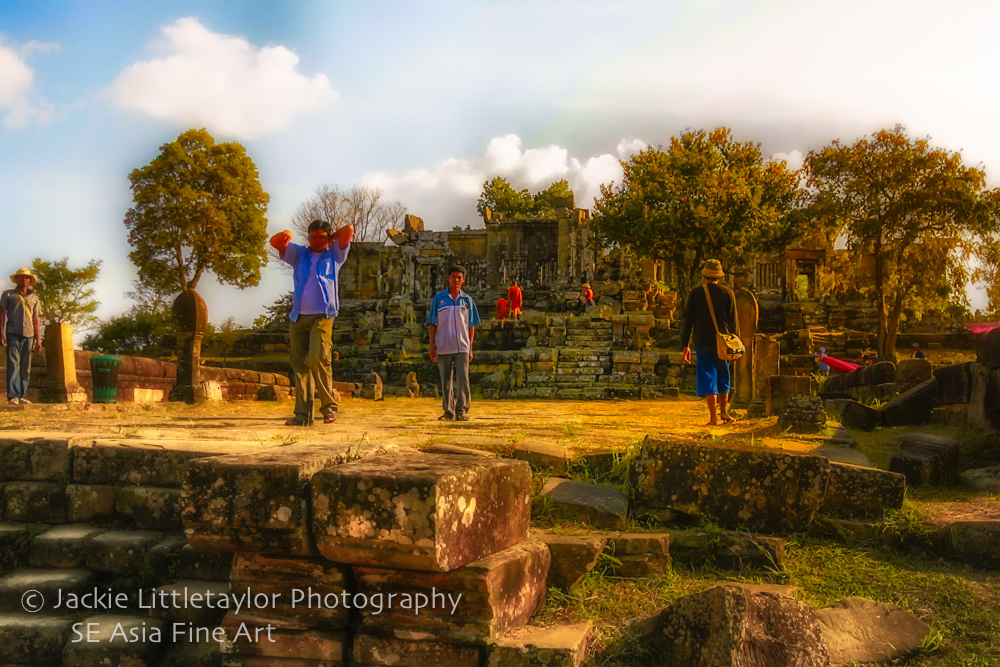 I made this trip with Thai friends and we just piled into the car and I had no idea where we were going.  Not uncommon to just go along “up to you”. Only spent about 4 or 5 hours and at the time did not know anything about the site. The entrance is on the Thai side and walk thru the border crossing into Cambodia and the site.  It is now closed due to conflict between Thailand and Cambodia on what country the site sits, Thailand or Cambodia. Link to Google map

The following is taken from Wikipedia

Preah Vihear Temple (Khmer: ប្រាសាទព្រះវិហារ]]) is an ancient temple built during the reign of Khmer Empire, that is situated atop a 525-metre (1,722 ft) cliff in the Dângrêk Mountains, in the Preah Vihear province, Cambodia. In 1962, following a lengthy dispute between Thailand and Cambodia over ownership, the International Court of Justice (ICJ) in The Hague awarded the temple to Cambodia.[1]

Affording a view for many kilometers across a plain, Prasat Preah Vihear has the most spectacular setting of all the temples built during the six-centuries-long Khmer Empire. As a key edifice of the empire’s spiritual life, it was supported and modified by successive kings and so bears elements of several architectural styles. Preah Vihear is unusual among Khmer temples in being constructed along a long north-south axis, rather than having the conventional rectangular plan with orientation toward the east. The temple gives its name to Cambodia’s Preah Vihear province, in which it is now located, as well as the Khao Phra Wihan National Park which borders it in Thailand’s Sisaket province and through which the temple is most easily accessible. On July 7, 2008, Preah Vihear was listed as a UNESCO World Heritage Site.[2]

The temple complex runs 800 m (2,600 ft) along a north-south axis facing the plains to the north, from which it is now cut off by the international border. It consists essentially of a causeway and steps rising up the hill towards the sanctuary, which sits on the clifftop at the southern end of the complex (120 m/390 ft above the northern end of the complex, 525 m/1,722 ft above the Cambodian plain and 625 m/2,051 ft above sea level). Although this structure is very different from the temple mountains found at Angkor, it serves the same purpose as a stylised representation of Mount Meru, the home of the gods.

The approach to the sanctuary is punctuated by five gopuras (these are conventionally numbered from the sanctuary outwards, so gopura five is the first to be reached by visitors). Each of the gopuras before the courtyards is reached by a set of steps, and so marks a change in height which increases their impact. The gopuras also block a visitor’s view of the next part of the temple until they pass through the gateway, making it impossible to see the complex as a whole from any one point.

The fifth gopura, in the Koh Ker style, retains traces of the red paint with which it was once decorated, although the tiled roof has now disappeared. The fourth gopura is later, from the Khleang/Baphuon periods, and has on its southern outerpediment, “one of the masterpieces of Preah Vihear” (Freeman, p. 162) : a depiction of the Churning of the Sea of Milk. The third is the largest, and is also flanked by two halls. The sanctuary is reached via two successive courtyards, in the outer of which are two libraries. 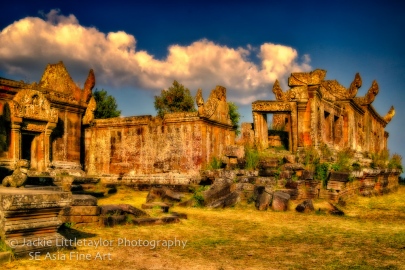 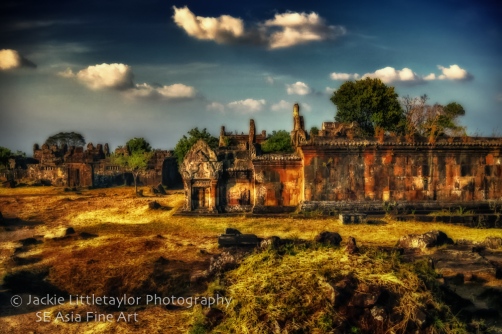 Posted on September 28, 2014 by Life in SE ASIA a Daily Magazine